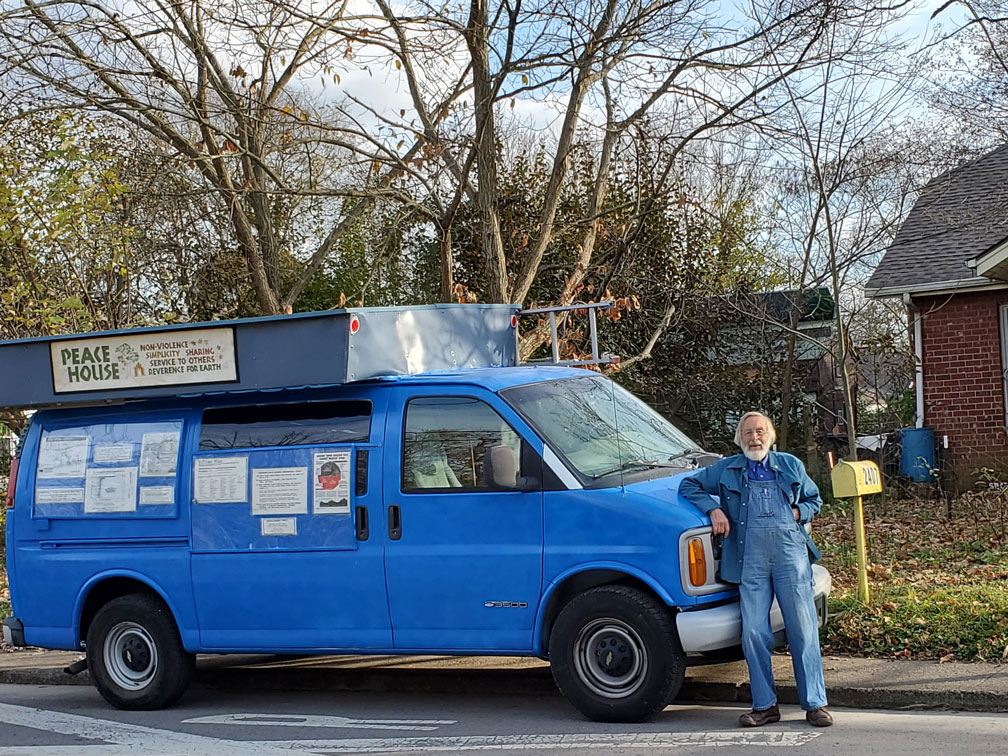 This website collects writings on peace and social justice action that I've written for small periodicals over the years, and selected excerpts from my autobiography, Positively Dazzling Realism. My life and ideas have been both deprecated and admired as "naïve idealism". In a world degraded and threatened by nuclear weapons, massive military waste, rapid climate change, and natural resource scarcities, I respond with words of Albert Camus, written in 1946, immediately after the end of a horrendous World War, when I was nine years old, words that suggested to me a title for a narrative of my life. I am one of the people he summons to action.

“Let us suppose that certain individuals resolve that they will consistently oppose to power the force of example; to authority, exhortation; to insult, friendly reasoning; to trickery, simple honor… Let us suppose they devote themselves to orienting education, the press and public opinion toward the principles outlined here. Then I say that such people would be acting not as Utopians but as honest realists. They would be preparing the future and at the same time knocking down a few of the walls that imprison us today. If realism be the art of taking into account both the present and the future, of gaining the most while sacrificing the least, then who can fail to see the positively dazzling realism of such behavior?” Albert Camus – Neither Victims Nor Executioners – 1946 – Combat [ translated from the French by Dwight Macdonald ]

I am a child of the Atomic Age, raised in the shadow of the mushroom clouds that rose over Hiroshima and Nagasaki in 1945. I was eight years old when "Little Boy" fell from the bomb bay of the Enola Gay into the air over Hiroshima. In an editorial for August 20, 1945, the editors of Life magazine wrote, "The individual conscience against the atomic bomb? Yes, there is no other way."  Only a few Americans were listening then.

I was also a child of Gandhi's half-century, ten years old when he was assassinated on January 30, 1948. I began to read about him that year. Dream and vocation took root. Abolition of war was to become the most persistent thread of meaning and action in my life. I hoped that war - international and civil - would be abolished in my lifetime, to be replaced almost completely by effective institutions of law and mediation. This would be the "positively dazzling realism" of which Camus wrote, reflecting on the horrors of World War II and his own experiences in the violent underground French resistance to Hitler's Germany.

Through adolescence and youth I was moved by both universal compassion and personal ambition to attempt a central role in this process, and I naively believed that I might. Experience kept bringing me back to an evolving awareness of how human psychology and cultural forces make it so difficult to make progress toward such obvious and reasonable goals. I also came to understand my personal limitations as a potential teacher and leader. Throughout, I held doggedly to a belief that any success worth having must come with honesty to myself and others. Any success achieved through lies, self-deception, or any form of betrayal or cruelty, would be worse than failure.

Mine has been among the luckiest and most successful of lives. I have learned to live as a healthy human being within Earth, often helping others along the way, with a minimum of harm to other beings that also want to live and thrive. That is a fine, though modest, definition of success for one person. During the Vietnam War I often quoted words of Murray Kempton, "A great man is one who knows that he was not put on earth to be part of a process through which a child can be hurt." To lighten the scourge of human violence is a sacred vocation calling to every idealistic realist of emerging generations, who will be ready to take up the challenge from my generation and that of our children. I hope to work with them as long as I may have a kernel of creative energy left in me.
​​

Privilege is an issue very much at the forefront in contemporary U.S. culture. Below is an essay I wrote in 2006 to clarify many forms of privilege.

Most of us are beneficiaries of many of these privileges, especially as citizens or residents of territories claimed under the jurisdiction of the United States.

​     I myself have been a very fortunate beneficiary of every form of privilege explained here. I have also, throughout much of my life, made personal choices to take the compensatory actions suggested here in most of my relationships, in order to foster greater equity in all human relationships And I have advocated most of the recommended social policies by educational, social and political action, as illustrated in the writings posted on the pages of this website.

This analysis of privilege is based on the premise that we can look at our position in the world relative to other human beings, and also to other living beings.

If we are in good health and happy, if we are comfortable, secure or prosperous relative to the average for the rest of humanity, we should assume that we are beneficiaries of some forms of privileged social advantage based on unjust economic and social relations; we are also beneficiaries of natural good luck, which is in itself an unearned form of social advantage.

The natural biological order of Earth is based on a competitive lottery of luck, in which a small minority of individual organisms experience survival to maturity and subsequent good luck, to the disadvantage of billions of others that suffer greatly, or do not survive.

​     The human idea of justice assumes that within defined human communities the relative advantages of individual members may be equalized, or brought closer to equity, by personal actions and social standards that compensate for disparities that evolved through natural and historical processes.

This analysis assumes commitments and attempts to bring the economic and social circumstances of everyone, within one community of Earth, into a reasonable  range of equity with the average or mean for all of the people on Earth, and to do this with a maximum understanding and respect for the life needs and diversity of other species, and the organic wholeness of Earth itself.

THAT LEAD TO OPPRESSION, EXPLOITATION, OR INEQUITIES IN THE VALUATION OF PEOPLE'S LIVES, THEIR ECONOMICALLY VALUED WORK PRODUCT, OR OTHER FORMS OF SOCIAL CONTRIBUTION

This analysis distinguishes two categories of privilege:
1) Privileges that are socially created, and that lead directly to economic or social disadvantages for people who are not in the privileged category;
2) Advantages that accrue through natural, random or accidental processes, that can be offset in whole or in part by compensatory social policies or personal actions.

These privileges are arranged below in the order (as perceived by the author) in which they result in the greatest amount of disparities, oppression or suffering to others, if compensatory social policies or personal choices are not pursued.
(the ranking order is based on contemporary culture as observed in Nashville, Tennessee. It would vary greatly by time and place.) 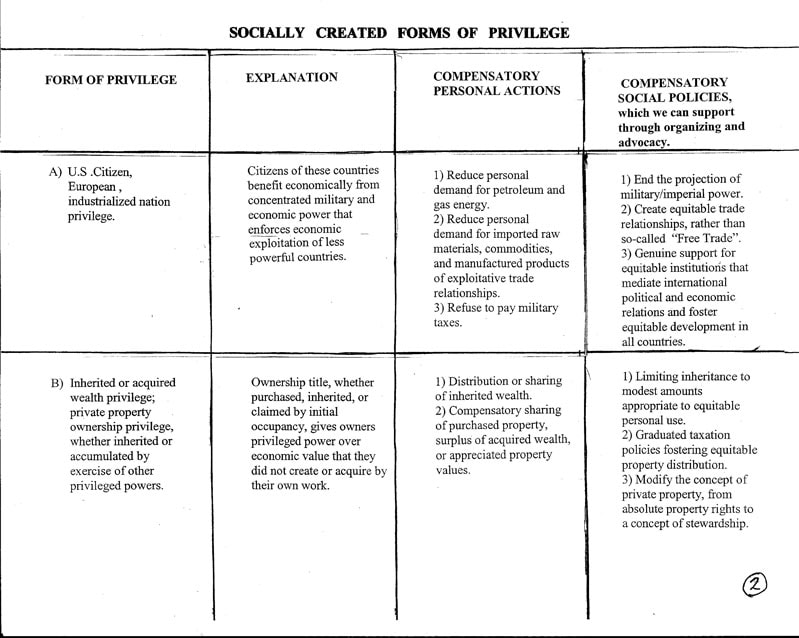 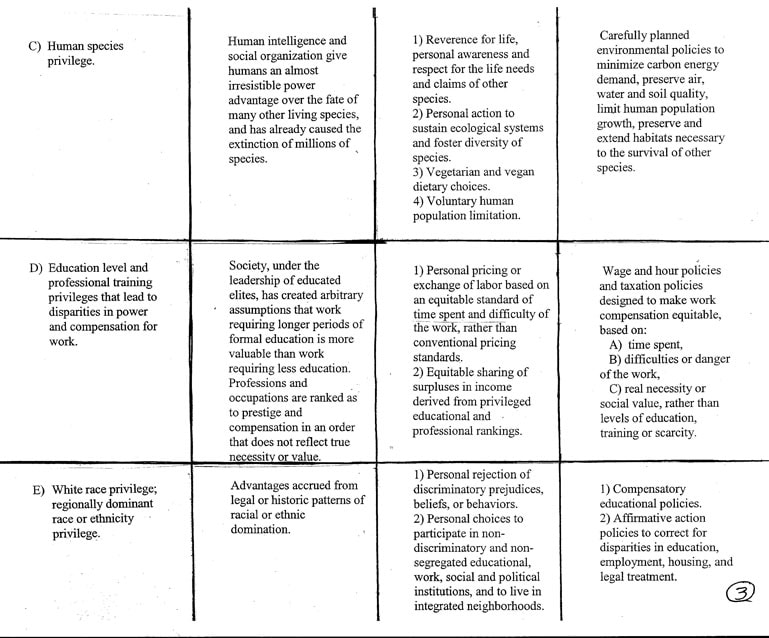 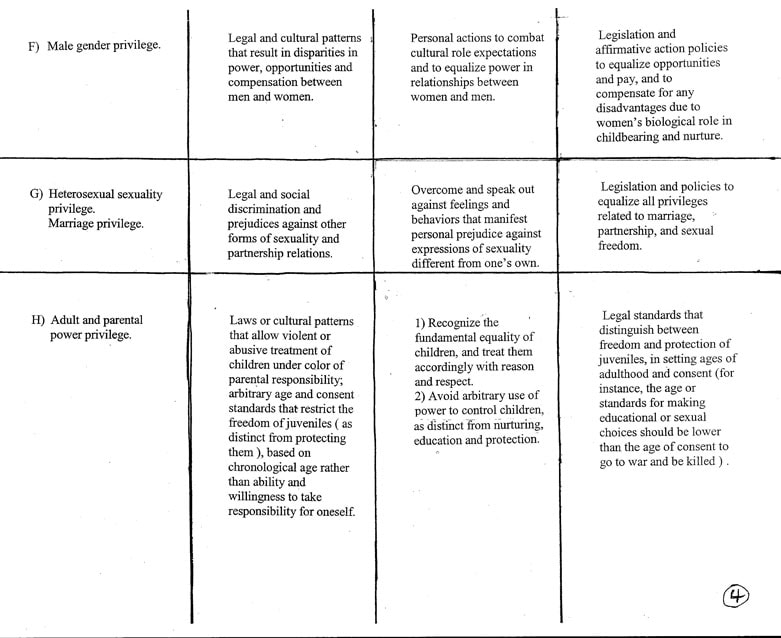 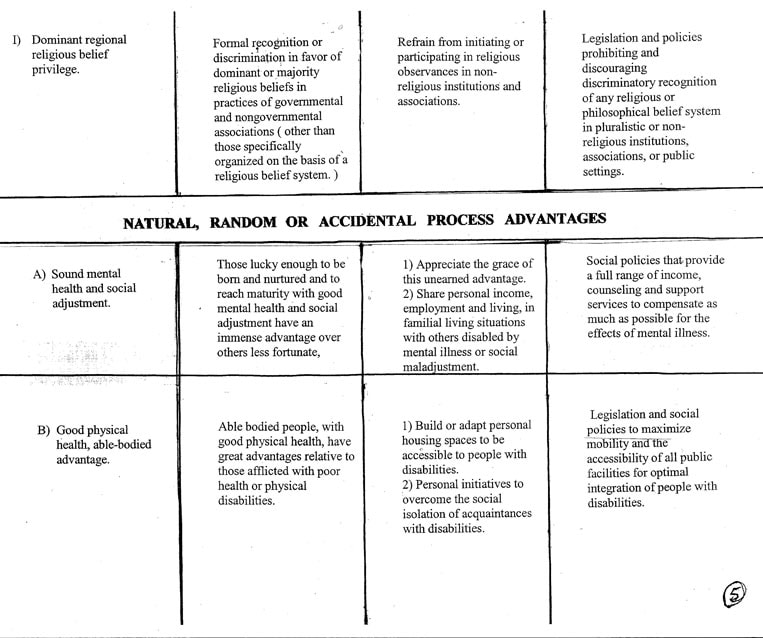 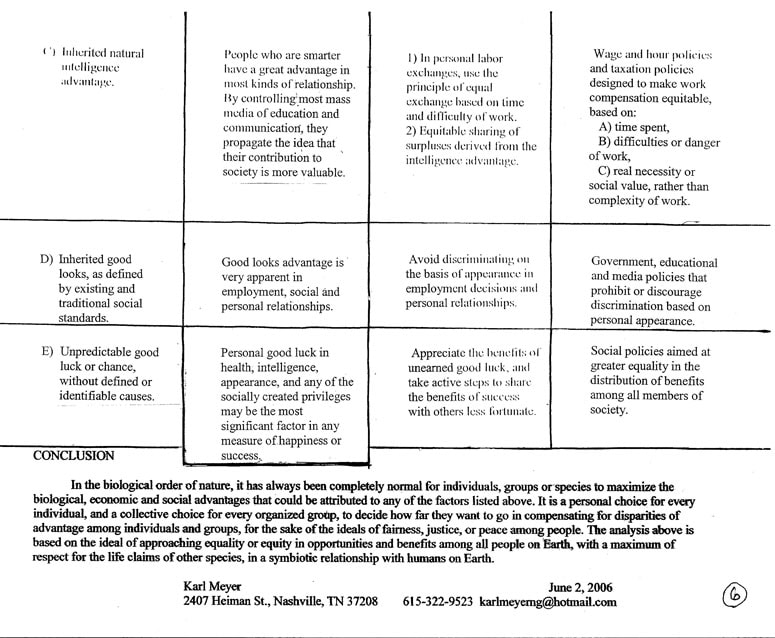